Michael Rosen: as a Jew, I am voting Labour

The legendary writer and educationalist confronts the anti-semitism scandal and explains why he’s backing Corbyn, his friend of 30 years

Michael Rosen attends a photocall celebrate 20 Years of the Waterstones Children’s Laureate at Waterstones Piccadilly in London, in February
×

I’VE met people who think that there are no Jews left in the Labour Party.

I’ve also met people who think that the Chief Rabbi is — in some way or another — in charge of, or a representative of all Jews in Britain.

Neither of these statements are true or anything like true.

If the media had wanted to, they could have asked Jewish MPs, Jewish candidates in this election: “Is it impossible or unsafe for you to be in the Labour Party?” It has been dishonest of them to have not done that.

There are also rabbis who have either said that they will vote Labour and/or have expressed great concern over the way Jewish religious leaders (Rabbi Romain and the Chief Rabbi) have intervened in this election.

You can read about these rabbis in the Jewish Chronicle online: Rabbi Danny Rich and Rabbi Howard Cooper.

This tells us that within the religious part of Jewish life, there are people who are worried about how religious leaders have politicised religion. In the past this has been levelled at Muslims for having brought in “communalist politics.”

Commentators like Nick Cohen were particularly scathing about this at the time of, say, George Galloway being elected.

The silence in the mass media about the dangers of a religious group saying: “Don’t vote for party X” are very great.

Cooper could see a danger that it could invite persecution.

In this particular election, it is also particularly dangerous because it is a two-horse race. Saying: “Don’t vote Labour” is in effect saying: “Let’s have a victory for the Tories.”

This is no surprise, as the Chief Rabbi welcomed the election of Boris Johnson to the leadership of the Tory Party and blessed him.

Johnson is a bigot and a liar. He and the Tories have been quite content to snuggle up to extreme right-wing and anti-semitic parties in Europe, like Victor Orban in Hungary.

He has also kept quiet about the pattern of anti-semitism coming from Jacob Rees-Mogg, who has talked of his Jewish colleagues in the House of Commons as “illuminati” and questioned whether they “understand” the constitution.

He has done the “Soros jibe” (this is an anti-semitic trope about the financier George Soros being deemed to be an international wheeler-dealer), retweeted Alternative fur Deutschland — the far-right party in Germany — and had dinner with the far-right British organisation, the Traditional Britain Group.

There are other incidents of anti-semitism in the Tory Party that Johnson has “kept silent” about (Crispin Blunt, Suella Braverman, Toby Young).

Yet, the Chief Rabbi is in effect entrusting those who regard him as their figurehead to a Johnson Tory government.

For clarity’s sake, the Chief Rabbi may “speak for” a majority of Jews in Britain — but he does not “represent” them.

He is the leader of the United Synagogue, which has a congregation of around 40,000. According to the Board of Deputies, there are 284,000 British Jews. Half of us are affiliated to synagogues, half of us are not.

In all the surveys of Jewish opinion, I have never been sure of how the survey of the 142,000 non-religious Jews is done. How do they find us?

One survey created a “panel,” having found secular Jews by focusing on areas where there is a high Jewish population and people having “Jewish names.”

Ahem, ahem — apart from Hebrew and Hebraic names, there are no Jewish names.

Most Jews in this country have German or Polish names (if they — we — are “Ashkanzim”) or Sephardi names (which may be, for example, Italian or Spanish) and/or we have English names.

What’s more, since the arrival of many EU citizens, there are many Germans and Poles who have names that before were considered to be Jewish, like “Meyer” — a standard German name that some Jews have.

The surveys may perhaps be accurate, but this method of polling looks decidedly dodgy. I have challenged this many times on Twitter and no-one has successfully defended it so far.

I have been asked several times to come on the radio and TV to talk about supporting Jeremy Corbyn. I have refused. I have said to the producer: “Do the honest thing, talk to a Labour-voting rabbi, or a Jewish Labour candidate and a Jewish Labour Party member.”

The reason I do that is because, firstly, I can’t answer any questions that the interviewers ask all the time, like: “Is enough being done? Are Jews being bullied in meetings etc” — and I don’t want to screw up this matter by appearing on programmes and saying: “I don’t know…” or “some of my best friends are Jewish and they tell me…” It’s a trap.

And, secondly, the times I have appeared, for example, on Al-Jazeera, the method of dealing with me (or Miriam Margolyes or Alexei Sayle) is to say that we represent no-one.

At one level, I have to say that that is true. I have never pretended and can’t pretend and would never pretend that I “represent” any other Jews.

For the record, for people who are not Jewish: I am no less Jewish than the Chief Rabbi.

I was brought up knowing that I was Jewish, and have participated in all my life (read, studied, reflected on, been particularly interested in) secular Jewish activities to do with Jewish writers, artists and Jewish history, and have of course reflected on this in my writing in hundreds of different ways.

I see myself as a poet and performer who has absorbed many traditions one of which is “aggadic” — that of Jewish story-telling.

When I’ve said these things on Twitter, it has invited Jews and non-Jews to call me a “kapo” (a Jewish concentration camp guard), a “used Jew” (that one from the editor of Jewish News), someone who “dons the cloak of Jewishness” (a Jewish DJ and actor), one of the “useful Jewish idiots” (from the commentator Dan Hodges), “a cheerleader for Soros” (from Lee Harpin, political editor of the Jewish Chronicle), and a plea to the BBC to not employ me to present the show Word of Mouth (from the QC Simon Myerson and the campaigner against anti-semitism (!) Euan Philips).

Clearly some people think that the best way to combat anti-semitism is to be anti-semitic.

Further: the whole question of anti-semitism has been fogged by an unknowing or unwilling lack of clarity over distinctions between slurs, prejudice, bias, discrimination, persecution, incitement to anti-semitic violence and then violence itself.

There are times when you might have thought that British Jews were experiencing a pogrom.

The minimum requirements for a claim that there is a “problem” in a given area (eg anti-semitism in the Labour Party) is that it is distinctly and measurably worse than in other places or in society as a whole.

I’ve known Jeremy Corbyn for 30 years. He is no anti-semite. He has put his neck on the line hundreds of times in opposing racism, anti-semitism, far-right fascism and Holocaust denial.

For the record, the sudden loss of Jewish support for Labour came when Ed Miliband was leader, who the Jewish Chronicle described as “toxic” for Jewish voters.

Miliband is Jewish. It was his support for recognition of Palestine before negotiations that did for him, they said. Being Jewish was no shield against this hostility.

Ask me, who am I “safer” with: a Johnson-led government with its record of the “hostile environment,” persecution of the Windrush generation and persistent anti-semitic jibes from leading party members or this Labour Party — and I will say Labour every time.

But I don’t look at the election purely through a Jewish prism. It is a clear class issue: a Tory government will continue to ravage the lives of of working-class people through attacks on wages, public services and the disabled. A Labour government will halt these and start to reverse them.

World business — “capitalism” — is in crisis: huge levels of debt, massive “productivity” problems in companies’ frenzy to compete with each other, a slide towards “economic nationalism” (the Steve Bannon philosophy) and Johnson is riding the Bannon bus which is driven by the US.

The US is desperate to create a bogus free-trade world, which in actual fact is a US-protectionist world. Johnson is backing this as a “solution.” 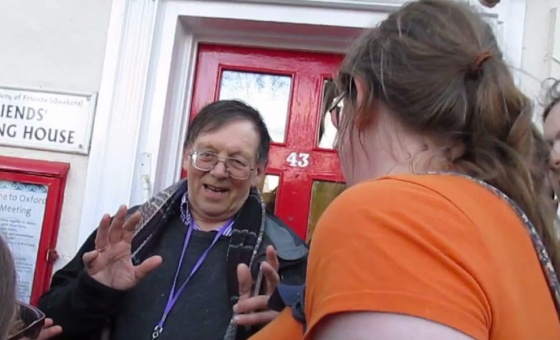