BOOKS The War on Disabled People by Ellen Clifford

STREET ACTION:  Disabled People Against Cuts at the ATOS Games in Birmingham
×

BOUND up in the relationship between capitalism and disability, disabled people are in a continuous war.

They are paying for a financial crisis not of their making and their human rights are being eroded due to austerity cuts, issues sharply bought into focus in Ellen Clifford’s book The War on Disabled People. 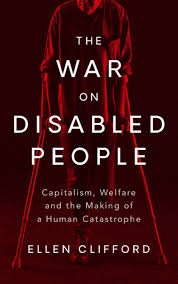 Disabled people are hidden in plain sight and “othered” by society, and when the austerity agenda began in 2010 with the coalition government, followed by subsequent Conservative administrations, the attack on disabled people and the wider working class was really ramped up.

Clifford's book thoroughly documents the government’s ideological policy agenda of welfare reforms to rip away the welfare-state safety net and put conscious cruelty at the heart of their austerity agenda. From the work-capability assessment to universal credit, the idea is to push the capitalist agenda, ripping away support to push disabled people into work.

As the UN Convention on the Rights of Persons with Disabilities committee ruled in 2017, the cuts faced by disabled people were a human catastrophe never seen before. Disabled people are having their rights systematically violated and, further excluded and marginalised in society, are paying a heavy price.

Determined to fight the government on their own terms and push back against oppression and hostility, the emergence of disabled people’s grassroots campaigns is part of the wider anti-austerity movement.

Campaigns such as Disabled People Against Cuts, Black Triangle Mental Health Resistance Network and others have given disabled people hope and determination that you can collectively organise and have a voice.

It has politicised new activists wanting to turn that anger at how austerity affects them into action.   And it has been successful in changing the narrative from one of necessity to one of ideological policy designed to harm and dismantle the welfare state and hand public services to the private sector.

Campaigners have been creative with their street actions, using direct action as a campaigning tool to bring wider public attention to the issues impacting on disabled people, from storming Parliament in 2015 in the fight for the Independent Living Fund to visiting Iain Duncan-Smith’s home in 2013 during the bedroom tax campaign.

They have also been working with academics to thoroughly research and document the impact of the cuts to present to politicians as part of a campaign strategy.

For 10 years, disabled people have been the spearhead of resistance against the government and they’ve been working alongside other anti-cuts groups, campaigners and trade unionists in joint solidarity in the fight to build a better society for all.

The book concludes with the question of where grassroots campaigns go from here with a Tory majority government in power — one of the numerous reasons why everyone  needs to read it.

The War on Disabled People, Capitalism, Welfare and the making of a Human Catastrophe is published by Zed Books, £12.99.