Caustic comedy on fraught divisions between baby-boomers and Generation X

ACCORDING to writer Mike Bartlett, families are awful. That’s why London was invented — so that you can move away from them. 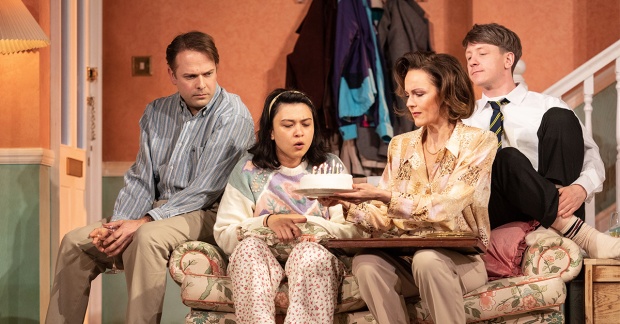 It's a barb, among many in Love, Love, Love, that draws proper guffaws in what could well be a comedy with tragic themes. It might be a tragedy with lots of laughs. It might not matter what it is — premiered a decade ago, it still has bite.

In it, Rachael Stirling is flamboyant and caustic as Sandra, drinking her own bodyweight in white wine and veering from 1960s hippy chick to power-dressing career woman in 1990 and finally a Chanel-clad divorcee of 2011.

She retains an utter lack of empathy throughout. There’s none for her boyfriend, ditched for a better option, nor for her troubled teenage daughter and bugger-all for her hapless husband.

She is self-driven, but what intrigues is that she may not be self-defined. The stereotypical hippy chick was as much a product of the times as the dresses she wore and the music she danced to.

A generation later, cracks are appearing — and more wine sloshing into glasses — as the poor woman tries to have it all and fails.

It’s a testament to Bartlett’s slick writing  and Stirling’s fine performance that this character, most definitely not the quiet kind, is not some cartoon harridan. She’s earthy, funny — and often desperate.

Husband Kenneth (Nicholas Burns) kickstarts the 1967 chunk of the action as a 19-year-old student, frittering away his free education subsidised by a student grant and sponging off his uptight older brother Henry (Patrick Knowles).

Four years — and what seems like a whole generation — older, Henry's self-enforced maturity has him so tightly wound that even his eyelashes seem clenched. Knowles is perfect in the part and it’s rather a shame we didn’t see more of him.

That student grant is a beautifully seeded theme, with the third act seeing daughter Rose (Isabella Laughland), in debt thanks to her university education, in a full-on, fabulous melt-down. “You didn’t change the world – you bought it!” she berates the parents.

Her sibling Jamie (Mike Noble) bears the weight of his parents’ selfishness. At the beginning, both his and Laughland’s comic timing are faultless. By act three, his bottomless anxiety is heartbreaking.

This is the second show from the Lyric’s artistic director Rachel O’Riordan, who had done superb work at the Sherman Theatre before joining the theatre a year ago. Cardiff’s loss is certainly west London’s gain.

In young Yan Bingtao, snooker has a new Chinese superstar