DENNIS BROE recommends an excellent account of the street protest by Parisian women in 1942, a turning point in resistance to the Nazi regime

Today Sardines Are Not for Sale
by Paula Schwartz
(Oxford University Press, £19.99)

1942 was perhaps the darkest year of the second world war in Europe. 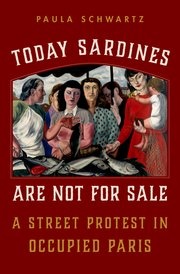 Nazi Germany, having already conquered most of the continent, embarked on what looked like an inevitable march across Russia through Stalingrad and Leningrad (today's Saint Petersburg) to the oilfields of Baku that would perpetually fuel the German war machine.

The Nazis saw the rest of Europe as both breadbasket and supplier of consumables since, in Germany, production was geared mainly to arms. In Paris, women attempting to get food for their families queued  hours outside shops and then, once inside, increasingly found the shelves bare.

But on May 31 — Mother's Day — there was a ray of hope on the Rue de Buci in the sixth arrondissement, one of the more well-off districts in the French capital. Women shoppers from working-class areas in the city stormed the chainstore Eco and threw sardines, banned for sale that day, out into the streets.

In Today Sardines Are Not for Sale, her “history from below,” Paula Schwartz describes the action as a “turning point in the waging of urban guerilla warfare” and resistance in occupied France.

It was a time when, because of  food shortages in Paris, the Nazi regime — supported by the French police and sections of the French middle class —  was losing support.

The protest is not commemorated today but it is anchored in a French history of female demonstrations that traces its origins to women marching to Versailles to petition the king for bread in the French revolution and women’s active role in establishing the Paris Commune.

The protest was deliberately targeted at “les grands magasins d’alimentation” — the large food conglomerates — that were guilty of hoarding and holding back supplies.

Even German officer Ernst Junger was struck with the marked class distinction in access to food, with Nazi military and the French elite — who he described as “gargoyles” — feasting on sole and duck at the Parisian landmark restaurant appropriately named Tour d’Argent (Tower of Money) and the “grey ocean of roofs where the hungry people live.”

The demonstration, organised by the French Communist Party, was led by a party stalwart, the teacher Madeleine Marzin who, when captured, proudly acknowledged her part in the demo and was condemned to death for it.

Her death sentence was commuted by Marshall Petain, head of the collaborationist government, who feared that to execute a woman would turn public opinion further against the Vichy regime.

She escaped one month later in a daring quasi-cinematic episode, as her fellow women prisoners caused a commotion by singing La Marseillaise as they were being marched to a prison train, allowing her to slip out of a window and be rescued by French railway workers.

She immediately returned to action in the resistance and after the war was elected to the national assembly, where she championed public education and low-cost working-class housing.

The Communist Party itself was the only political group to mobilise women as well as the first political party after the war to nominate women to stand for office, Schwartz notes.

It typified the party’s focus on championing women’s issues, detailed in this fascinating and original account.