The authoritarian president visited a new eco-mosque in Cambridge

CAMBRIDGESHIRE police were asked to arrest Turkey’s authoritarian President Recep Tayyip Erdogan for war crimes today as he visited the city to open a new eco-mosque, partly funded by Ankara.

The allegations made against him includied atrocities committed during Turkey’s recent invasion of northern Syria as well as historical crime.

Police were handed a judgement from the Permanent People’s Tribunal, which found that Mr Erdogan was responsible for war crimes and crimes against humanity regarding the Kurds, including operations in Nusaybin and Cizre between 2016 and 2017.

They were also given a dossier of war crimes documented by the Rojava Information Centre, and were asked to detain Mr Erdogan for the judicial execution of Kurdish-Syrian politician Hevrin Khalaf, who was killed by Turkish-backed Ahrar al-Sharqiya jihadists on October 12.

The war crimes charges were made as Mr Erdogan arrived following a tumultuous Nato summit where he was grilled over his “ambiguous relationship with Islamic state” by French President Emmanuel Macron.

Turkey’s bullish leader cut an isolated figure as he failed to win support in his bid for the Kurdish-led People’s Protection Units (YPG) to be deemed a terrorist group by his warmongering allies. He also feebly backed down from his threats not to support Nato’s Baltic defence strategy.

His invitation to the Cambridge mosque, made by the musician Yusuf Islam, has proved controversial. Mr Erdogan has jailed many of his political opponents, including 13 MPs from Labour’s sister party, the People’s Democratic Party (HDP).

Recent figures show at least 16,300 of its activists and elected officials have been detained since 2015. More than 9,000 academics have been purged for signing a peace petition while around 170,000 public sector workers have been sacked.

Members of the Kurdish community were joined by anti-war activists, trade unionists and local Labour Party councillors in the city, protesting with chants of “Erdogan terrorist” on an impromptu march.

She said: “Erdogan is a war criminal and shouldn’t be welcome in Cambridge. He is the biggest supporter of Isis and is carrying out ethnic cleansing of Kurds in Turkey and Rojava.”

Ms Ari condemned the Nato war machine and called for an end to Turkey’s illegal war and occupation of northern Syria.

Cambridgeshire Labour Councillor Jocelyn Scutt warned of the attacks on women led by Mr Erdogan and the attempt to crush democracy through the arrest of journalists, politicians and academics.

“We are united and we say no to Erdogan,” she said.

Protestors were cheered by Cambridge residents as they made their way through the city centre, although they were blocked from reaching the mosque, which was protected by a heavy police presence.

Cambridgeshire Constabulary said the dossier and war crimes allegations were being investigated by the appropriate department, but said the arrest of Mr Erdogan was unlikely. 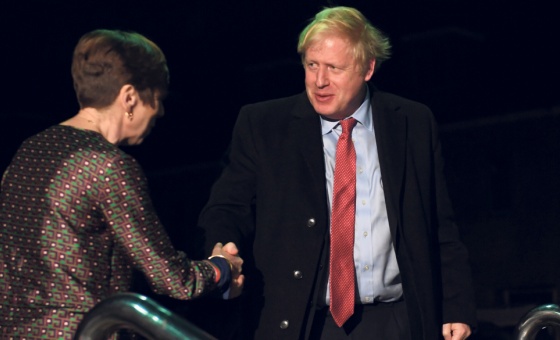